Speed up your analysis of varied forensic samples

This White Paper introduces the Agilent QuickProbe GC/MS system — a novel system for quick analysis of various forensic samples including liquids, powders, tablets, plant materials and plastics. When used efficiently, the QuickProbe system and its consumables can quickly screen samples such as white powders or other suspected drugs of abuse, possibly reduce backlogs, and allow users to select which samples require confirmation.

Introduction
Fast screening of samples in under one minute can be achieved with Agilent's QuickProbe GC/MS. It requires some unique consumables and techniques for successful and efficient incorporation into the laboratory environment. Samples are loaded onto probes and inserted into the QuickProbe inlet, but loading the probes requires some care to avoid overloading the GC/MS system (column and MS detector) or carryover. The direct-insertion GC/MS system has adequate separation for peaks in the same compound class, and retains good peak shapes for compounds that normally tail in GC/MS analysis. 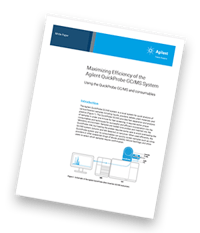 The White Paper details the consumables necessary for sampling and running the system and provides a list of the recommended consumables to use with the carrier gas and split vent.

Instrument conditions
Two sets of instrument conditions were used in testing the QuickProbe GC/MS system and consumables. The White Paper provides a table detailing the method parameters when using glass probes, round‑tip or pocket, with samples and another summarizes the TSP vial method parameters. Based on the TSP vial design and its use with testing plastics, the injection time is longer to allow volatilization of compounds of interest.

Suggested workflow for sampling
1. Run a system blank.
2. Run a probe blank.
3. Run the sample.
4. Run a blank.
5. Run a standard, if necessary.

Sampling with round tip probes (RTPs)
Liquid mixtures that contained compounds of the same class type, such as opioids, were used to test the ability of the QuickProbe system to separate and identify closely eluting compounds. An amines mixture in methanol containing amphetamine, phentermine, methamphetamine, MDA, MDMA, and MDEA at
250 μg/mL was sampled with an RTP. The system was able to separate these early eluting compounds. All six amine class compounds were identified with library match scores greater than 88. The peaks were not fully baseline resolved, but the data analysis software was still able to identify each compound correctly with high match scores.

Further results are given for aerosol sampling, tablet scraping, ointments and creams, and plant material, such as cannabis leaves, that were all tested with the system.

Conclusion
Various forensic sample types can be tested with the QuickProbe GC/MS system for fast, qualitative analysis. Liquid, tablets, ointments, and plant material can be sampled with round-tip probes by dipping the probe into the sample or scraping along the sample. The pocket probe has been designed to hold a small amount of powder material in the concave tip and can also be used to scrape tablets. TSP vials can be used with, ideally small, ground, or chopped plastic pieces, powder, or plant material. For powders and plant materials, a longer injection time can provide more time for terpene or terpene-like compounds to volatilize and profile those compounds per sample. Carryover can be mitigated with careful sampling techniques and frequent probe holder and system blanks. With the potential for coelution and overlapping peaks in the total ion chromatogram, mass spectral deconvolution software and a large mass spectral library make data analysis and peak identification easier and faster for the user.