by Separation Science in collaboration with Restek 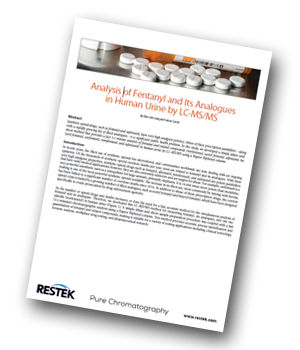 Introduction
Synthetic opioid drugs, such as fentanyl and sufentanil, have very high analgesic potency. Abuse of these prescription painkillers — along with a rapidly growing list of illicit analogues — is a significant public health problem.

As the number of opioid drugs and deaths increases, so does the need for a fast, accurate method for the simultaneous analysis of fentanyl and its analogues. An LC-MS/MS method has been developed here for measuring fentanyl, six analogues, and one metabolite (norfentanyl) in human urine. A simple dilute-and-shoot sample preparation procedure was coupled with a fast (3.5 minutes) chromatographic analysis using a Raptor Biphenyl column. This method provides accurate, precise identification and quantitation of fentanyl and related compounds, making it suitable for a variety of testing applications including clinical toxicology, forensic analysis, workplace drug testing, and pharmaceutical research.

Results and Discussion
Chromatographic Performance
All eight analytes were well separated within a 2.5-minute gradient elution (3.5-minute total analysis time) on a Raptor Biphenyl column. No significant matrix interference was observed to negatively affect quantification of the five-fold diluted urine samples. The 5 μm particle Raptor Biphenyl column used here is a superficially porous particle (SPP) column. It was selected for this method in part because it provides similar performance to a smaller particle size fully porous particle (FPP) column, but it
generates less system backpressure.

Linearity
Linear responses were obtained for all compounds and the calibration ranges encompassed typical concentration levels monitored for both research and abuse. Using 1/x weighted linear regression (1/x² for butyryl fentanyl), calibration linearity ranged from 0.05 to 50 ng/mL for fentanyl, alfentanil, acetyl fentanyl, butyryl fentanyl, and sufentanil; from 0.10 to 50 ng/mL for remifentanil; and from 0.25 to 50 ng/mL for norfentanyl and carfentanil. All analytes showed acceptable linearity with r² values of 0.996 or greater and deviations of <12% (<20% for the lowest concentrated standard).

Accuracy and Precision
Based on three independent experiments conducted on multiple days, method accuracy for the analysis of fentanyl and its analogues was demonstrated by the %recovery values, which were within 10% of the nominal concentration for all compounds at all QC levels. The %RSD range was 0.5-8.3% and 3.4-8.4% for intraday and interday comparisons, respectively, indicating acceptable method precision.

Conclusion
A simple dilute-and-shoot method was developed for the quantitative analysis of fentanyl and its analogues in human urine. The analytical method was demonstrated to be fast, rugged, and sensitive with acceptable accuracy and precision for urine sample analysis. The Raptor Biphenyl column is well suited for the analysis of these synthetic opioid compounds and this method can be applied to clinical toxicology, forensic analysis, workplace drug testing, and pharmaceutical research.